baby you can drive my car part the third 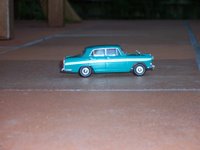 Because I wasn't happy with all the photos of the models, and I haven't got around to taking any more, we are now going to move out of sequence. The next car was a 1964 Mini Cooper (998cc long stroke version), but we will move on to the one that came after that, which was a 1964-ish Austin Freeway station wagon. I can't imagine what possessed me to want a wagon - maybe all those girls I'd get in the back, ha ha - but that's what we got. It was in fact in pristine condition with that special 1960s new vinyl smell. I eventually sold it to a school mate some time later. In common with all Freeways it was as slow as a wet weekend. I did get the head shaved and put a set of extractors on it which made no noticeable difference to the get-up-and-go at all. It did have good anchors, though, which proved helpful once when coming back from a weekend trip to Sydney with the lads and I came on the back of a slow-moving Holden just the Sydney side of Goulburn. "Your bloody precious EHs would never have pulled us up in time!" I gloated to my Holden-loving load of suddenly-pale passengers, which may or may not have been an accurate statement.

Some years later when my second Triumph, a Mk2 2.5PI was hors de combat after I attempted to ford a flooded river in it - forgetting at the crucial time that the air-intake was a hose about 6 inches off the deck, so it snuffled up a great gob load of H2O and bent all the rods - I bought a Wolseley 24/80 (scroll down for the pic) as a temporary runabout. The 24/80 was of course the upmarket badged version of the Freeway, with leather seats and all. I called this one Eric the Half a Car, for reasons which will be immediately apparent to all Python lovers. For a car that was quite old and extremely decrepit, this was quite a good 'un - only let me down once (starter motor). It got fearfully abused: my favourite trick on the dirt roads around Canberra was to come howling (well, floating) into a corner and flatten the accelerator and brake simultaneously, it being an automatic. You could get a nice sort of drift going, accompanied by "please make him stop" sounds from the Borg Warner 35 'box.

And then some years later again, I bought another Freeway as wife-to-be and I attempted to scrounge money for our new lives together. I had a warm-ish Mini K at the time and the Freeway was a good deal cheaper, but I only kept it a few months before getting a Morris 1100. Not about saving money at all, more about the fact that I just liked to change cars regularly. Which is why I've owned over 30. And you will have noticed already that I kept changing them for the SAME sorts of cars. I owned three Minis in all, too.

The model pictured is in fact of a Morris Oxford Mk6, but the body shape is generally the same as the Freeway except in details like the grille, tail fins etc. These weren't released in Australia, we got the Austin version (the A60). BMC adapted the A60 to cater for the Australian predeliction for 6 cylinder cars by adding 2 cylinders to the then current version of its B series motor, making a 6 cylinder of 2.4 litres. With a 4 bearing crank, they often used to run the rear main bearing. I sometimes see a Wolseley for sale on eBay and start to think "what about it", but usually someone hits me before I do anything rash.
Posted by phil at 9:49 pm

hint: don't use the camera's flash when pointing at shiny objects :-)

I am enjoying these articles about old cars. good stuff. however at 30+ owned you are going to take a long time to get to what will probably be my favourite - the red pug.

only drove it twice, and gently both times, but it was very pleasant indeed.

it did, however, have the worst-arranged engine bay I've ever seen - even worse than those (rather baroque) north-south front wheel drive Saabs. even my Celica GT4's bay is less cramped, and it has an extra half a gearbox, not to mention turbocharger and intercooler

All that batch of photos were taken in broad daylight, but some (including the Morris) were out of direct sunlight - I think the metering on the digital is not all it could be. It may have a mechanism to override but I haven't investigated.

It might be a wait for the Pug story as I don't have the model yet to go with the story. But the best model shop I've found to date, Model Cars Too in Sydney, tells me that Minichamps will make one this year. He also thinks they might make the Mi16 version which would be good and if they do it in the same red as mine, I'll be on a winner. So far I only have three models in the same colour as the real one I owned. But some good stories to come - lots of different Triumphs, P6 Rover, Datto Fairlady, Austin 1800, Morris 1100, VW Passat, Mercedes 200, P76 and - believe it or not - a Holden Torana SL/R.

hum, maybe instead try holding a piece of white paper (any not-too-heavy white paper will do) in front of the flash when you take the pic. make sure you shut your eyes before it fires, or it'll hurt :-)

this should diffuse the flash at least a bit...

Ok - I confess I printed out some pages from here to send to my father who collects and restores cars.

Melly - I was more interested in how you actually discivered that VVB existed :-)

I would like to restore actual cars but my skills aren't up to it..as subsequent stories will show. Tell your father to wait for the Rover P6 story.

Wassamadda, Phil? Forgotten how to blog?