A bit more on Working Identity. Another theme that struck me about the case studies was the number of people who went into the not-for-profit sector, ie mainly humanitarian causes. At least half a dozen of the 25-odd cases, all successful professionals including quite a few in management consulting, had identified through either serendipity or reflection that this was where they wanted to work - to make more of a difference, they found. There's one snippet where an investment banker reflects on what he feels he had achieved in investment banking and decided it wasn't very much, and his embarrassment to the extent that he used to hide his profession when meeting people at parties, for example.
Which is not to take a cheap shot an investment banking, tempting though that is. More to the point, the theme of moving from highly paid for-profit jobs into (usually) less well paid employment in the not-for-profit sector seems to be becoming more common, as I read similar stories quite often in management journals and business magazines.
Of course for it to be a genuine trend you'd need to do some objective comparisons over time. I'm not trying to draw any long bows between the rise of the market economy and greater levels of dissatisfaction and inner turmoil in highly-paid executives. I've no doubt that many businesspeople have always sought to assist in various philanthropic ways. Still, it would be interesting to see whether there is in fact some trend emerging.
My copy of Working Identity is to go on loan almost immediately in a direction I hadn't anticipated, namely to a good friend who has just failed to get a job he had every reasonable expectation of getting and is now in introspective mode. You never know, as they say.
Finally, Kenneth Davidson, who seems to be drifting even further "leftish" in his economic analysis, not that there's anything wrong with that as we must let a hundred schools of thought contend, writes here about the imminent shitfight over the proposed Australia-China Free Trade Agreement. Government reliance on dodgy modelling is nothing new, Keating and co did similarly on the Uruguay Round negotiations. Those forecast numbers have still not been achieved as far as I am aware. Why you'd want to go into an agreement with an economy that ceteris paribus is destined to overwhelm you anyway is beyond me. Davidson laments that trade "liberalisation" will be the outcome with the China agreement: well no surprise there, that's what such agreements are meant to do. Classifying China as a market economy for the purposes of the agreement is just crap, there's no other word for it.
Trade agreements are fine in principle, provide you get something out of them. That's the bit that seems to be missing here. Investment? Services? Hmmmm.
Meanwhile, here's a picture of the main church (St David's?) at the Port Arthur site. I love the feel of the light in the afternoon. 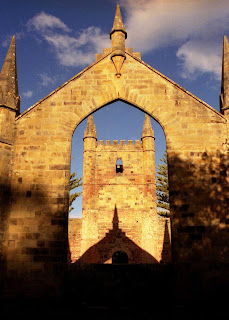 Last thoughts. Does Australia love Snoop Dogg? Do you love Snoop, as his lawyer avers? Answers on the pack of a Chupa Chup to this address.

Call me an introvert - It's still beyond me how FTA's are of such high benefit to us. But that's okay - with four in the pipelline this year, I'm sure we'll be told at length just how good they are.

In the meantime - stunning photos my friend!!! Hope you didn't get a cold arse waiting for the beautific play of light

FTA's - someone please tell me how these are great for the AUSTRALIAN economy! Don't worry, we've got four of them on the books this year.

In the meantime - Stunning photos! Hope you didn't get a cold arse waiting for the beautific play of light!!!

In the mid 1990s the US under Clinton attempted a series of FTAs with various countries under a so-called "hub and spokes" model that Australia quite correctly identified as great for the US and rubbish for everyone else, the entire point of course.

Because Howard capitulated (or whatever it was, the word "suck" springs to mind) on the USFTA, it's rubbish for us as well, particularly on IP. We'll be reaping that particular whirlwind for a long time.

Hopefully he's not the last of what seems to be a dying - or a maliciously and recklessly culled (a la harp seals) - species.

More strength to his fine and reasoned position, some of us love 'im ... and why not!?