I've been meaning for a while to make some comment on the frequency with which the word "fairness" or along the lines "it's only fair" has been appearing in the Howard media blitz. Way to grab the subliminal attention and all that stuff, guys. Why, "fairness" is the characteristic that people most often associate with the Born to Rule, eh? Because people would only be born to rule if they acted fairly, it stands to reason.
The daily vox-pop in the Curious Snail this morning gave the lie to the "Howard is gone" meme - 3 out of 5, as I recall, thought he was the most wondrous being the world has ever seen. Mind you, 5 is a small sample. And it is the C-M. Just a warning against hubris I guess.
Meanwhile, what really makes us happy. In VVB's case, it'll be when the Lotto comes in and we can get one of these: 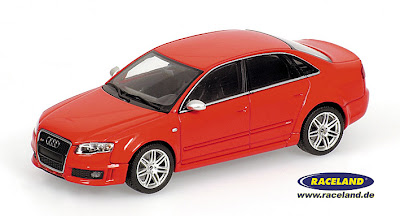 Except I want it in gunmetal grey. I've had a red car, people make such unkind jokes. It's an Audi RS4, for those not into cars as much as we are. Oh, and I'd like a real one, not a model.