If it wasn't bad enough that the more intolerant and backward looking bits of the Islamosphere want to blow us to kingdom come (hmm, bad metaphor given what's coming...), the good old Church of England has its own variants, and I don't mean the ones that usually command the news. So, 95% of VVB's readers are going to hell? Yeah, whatever...make that an even hundred, I think.

Bloody proselytisers. Look, if you wish to believe in imaginary friends, the moon being made of green cheese or whatever, fine. The warmth and power of congregation (which is a nice word) and hymn-singing, great. I appreciate the benefits of congregation. Just keep the belief bits to yourselves and don't try to threaten me with some juvenile scare-stories. A trusting child who did what he was told without question (came from being slight and weedy and having a large and threatening father, I think), I got sucked in by a tricky clergyperson in about year 4, and I haven't forgotten it. If you have to play tricks on 8 year-olds to get them to come to Sunday school, maybe you should reflect on the power and righteousness of your message. You might find something missing.

Therese Rein is a naughty person for wanting to maximise her profits. No she's not, she's naughty for not supervising the people who do her due diligence. I'd still rather have a PM's wife who understands how the world actually works, in particular the commercial world, than one who's more obsessed with the thread count of the drapes, or something similar. A former work colleague now works for Ingeus, I must whether she's on an AWA. It is to laugh...

Bugger it, I have a cold and application of vino collapso is not working as I had hoped. So I'm off. Here's a picture. It's the Kabul Gorge which, unsurprisingly, is on the road to Kabul from Peshawar. Spectacular, no? 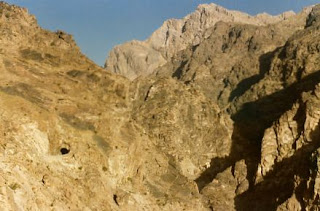