all along the watchtower

...there must be some way outta here
said the joker to the thief...

Still ploughing my way through The Natural Advantage of Nations. It all makes perfect sense provided you accept that it will require government and corporations, in particular, to give up on the growth project as measured by both population and GDP. Once growth isn't the sole objective, then you can start to draw up the alternative rules. Anything in the meantime is just nibbling at the edges.

Dunno why it takes about 400 very small type pages to say that, it's about 3/4 of the way through. The rest is seemingly pointless propagandising and force-fed optimism. How to remain optimistic when, essentially, the message is "come the revolution?"

So that's not really worth a whole post, eh? We could divert onto a post about optimism but it'll be an uphill climb from this start. That would require me to rewrite it and we're too far gone now...

In lieu, how about this? The story of alleged bribery of the House of Saud by British Aerospace, aided and abetted by the British Government, has been hanging around the UK press for a while but I don't recall seeing too much locally. Maybe now that evidence of Ministerial corruption is seeping into the light, we'll see a bit more. Here's George Monbiot's analysis.

Of course, everyone does it (Iran-Contra, AWB, anyone?). But it certainly throws into stark relief the hypocrisy of western lecturing and posturing on corruption in those countries where we usually expect it to happen. And believe me it does, and it's far more evident. All that seems to separate us is that we are usually more successful at hiding it. The benefits of a more sophisticated legal and financial industry, I suppose.

So the task of reform is vast, vaster than we'd like to think. In fact it's so vast that we actually have to start with reforming the word 'reform' itself which, over the last 18 years, has come to mean deregulation, privatisation, user-pays, the supremacy of private property rights and capital over damn near everything else, and budget surpluses. Whenever I hear the word reform I think of Brendan Behan and his autobiography of his time in Borstal, a reform school. So it means you have to believe that reform means fixing bad things.

That meaning has been bastardised. In its current narrow application to the domination of economics over our everyday lives, it in fact only means "a different model." However, the forces in support of deregulation etc etc etc, have won the argument for the last several decades and so now we get indoctrinated that everything that came before was bad. Which is very demoralising for lots of people, particularly those who don't recall it as being so bad at all. No wonder people get confused.

Anyway, enough of that. The market economy is a very beneficial thing and it is in fact so insidious that it has permeated even the robust walls of Chateau VVB. How so, I hear you ask?
Like this: I have two guitars for sale.

Come one, come all.
No not, yet, here's tonight's photo . It comes to you courtesy of the RAN, I've forgotten which 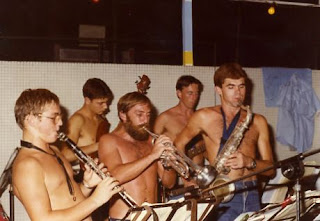 ship but it was the one that carried the fleet band, the jazz ensemble component of which you see here. As these are strapping young men without their shirts on, I am hoping that JahTeh will approve.
Posted by phil at 9:31 pm

You know me so well and for a moment there I thought a few didn't have shorts on.

Excellent, too old and weak to run.

JahTeh: making predatory behaviour respectable since who knows when...