I can't get started

I can't get started, an old jazz classic, applies in a number of ways tonight. Most obviously, the increasing intervals between posts indicate an inability to hit the keyboard and commit the half-formed thoughts to the ether. This has partly been influenced by being busy and work and bringing some of that home, hence preoccupation and lack of time. Also a very sore neck from too much time at the keyboard.

And tonight, it also results from some internetty problem, I can't get all my e-mails and everything else is slooow.

Most unfortunately, what it means is that the various things I've run across or thought about during the week that deserved a VVB-like comment have mostly disappeared from the increasingly dodgy memory.

The increasingly dodgy memory, or in fact the increasingly dodgy brain function full stop, was in full flight last night. Was talking to a couple of folk at a drinks function, one went to leave and although I'd been talking to him for a few minutes, knew who he was and had been calling him by name, when it came to "see you later" the brain said "Peter" and the mouth said "Jim", who was another person in the group. And I sort of watched myself doing this. Weird.

They had a magical jazz guitarist playing - shame I could barely hear him, but as I left he was playing a version of "Paint it, Black." So I go outside and there's some different, mega function on and the music playing is the Stones original version. Ultra weird.

So that's last night dealt with, but bugger me if much remains from earlier in the week.

It turns out that why the internetty thing is slow slow is that we are over our monthly limit, no doubt brought on by massive downloading of the files that are essential to Offspring No 2's university assignments, being landscape and built environment-related as they are and hence chock-a-block full of pixels.

The BRW Rich 200 edition landed with a solid 2kg thump in the letterbox yesterday. Somewhere in it I read about the net wealth of the 200 increasing by some 26% over the last year. I wonder what the net wealth of the average Aussie increased by? And what it increased by if you deduct the top 200 from the total before doing the per capita thing? Chateau VVB doesn't feel 26% wealthier although we have been able to sustain more discretionary spending in this period than previously.

Not to mention the world's best treasurer as being the catalyst for all this wealth, of course. Here at chateau VVB we're inclined to look to China first, and then to the wonderful world of credit in all its forms. Do we have sufficient asset backing for all these new financial instruments that are powering the mergers and acquisitions, trade, housing and straight consumer spending?
Looking at the task facing offspring no 1 who wants to buy a house, Peter Martin reported during the week that Canberra house prices rose 30% in the last year. Offspring no 1's salary certainly didn't rise by that much even though he got a promotion during the period. Do we really want to be a nation of landlords and tenants. Does offspring no 1's Gen x cohort unanimously believe that they should do the economically rational thing, that is, be renters and put the excess into shares?

The single comment on Peter Martin's price talked about people buying bigger houses than they need. When I look at the weekend real estate section and the c olour weekly mag that lands with a well-upholstered thump in the driveway, there seems to be a leats some truth to this. I'm just utterly gobsmacked by some the places for sale. Chandeliers, double dressing rooms, tennis courts, 5 car garages, it's unbelievable. And these houses are not a tiny minority. The real estate agents here in Brizvegas talk about $1 million houses as the base level at which you get something 'decent'.

Finally, didn't the Do Not Call Register come into effect yesterday? Did not Chateau VVB register on the first day? Did we get a call from some overseas gentleman this afternoon seeking to convert our home ownership into a debt instrument?

Do you see a link between all this stuff?

Is it John Howard's fault?

If not, should it be?

Finally, have a picture of a corner store. It's the corner store you have when you live on Dal Lake in Sri Nagar. 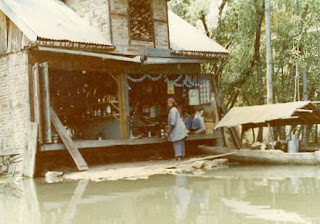 It's not the buyers who are asking for these huge houses and equally huge prices. My house is a bit over 13 squares (old measurement) and we added a carport later and it was affordable on one salary. That's when the rot set in when the banks started to take two lots of income for a loan.