through a glass darkly

It's been a frantically busy week which has meant not much interest in blogging when I get home. I always bring some work home and I usually do about half of it. A couple of times I've come home and fallen asleep on the couch.

OK so that's me, what's been happening outside the immediate circle? Well I read Crikey - a little less of it each day, I reckon - and check out Ozpolitics. The blog headings are a real turn-off: predetermined positions signalled, often with the aid of inflammatory language and neither 'side' has a mortgage on that. Of course seeing things through a particular world-view, the language and positions of one 'side' usually appear far less wholesome than the other, but some reality really should intrude. Why do we make life so miserable for ourselves (yer 'umble correspondent included).

So I check out my faves where I'll find something to inform or amuse: JT, Phillip Challinor (this just gets better and better), Harry Hutton (the comments are always hilarious), Gorilla Bananas, Sinfest (even though I don't understand it), Penny Arcade (which I understand even less), Riot Act for some news about the old home town, is the bear awake yet (no), Stereogum for new music, Capitol Hill Blue (though I'm going off that), Washington Monthly, and so on. If I'm feeling resilient, Political Daily Review has a new name but will still yield a week's reading.

Recently, a couple of newies (to me): bwca and a fellow Latin and car fan in Toowoomba (bet it's cold there tonight). And usually LP, Club Troppo and a few others.

Which brings us to where we are: a bit tired of the permanent political campaign, quite over the things that divide us and ready for another holiday (as Mrs VVB continually reminds me). The water tank people have absconded with our deposit it would seem, the house has white ants, the pool has gone green.

On the other side of the ledger, I saw (on film) a story today about how some government facilitation had brought about a rebuilding of social capital in some western Queensland regions: stories of ordinary people being supported to support each other. Very good for the spirit and rekindles a little bit of hope.

Yes, bloody lefty tax-eating heavy-handed statist intervention. Everything that's supposedly wrong with the world according to the dominant discourse. Except, just occasionally, it works. 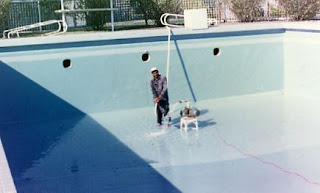 Have a lovely weekend and to help with that, have a picture of how you clean swimming pools in Pakistan. When I came out of the office and found this unusual, not to say somewhat dangerous, activity going on, the other staff assured me that the fellow in question was "shockproof".
Posted by phil at 7:52 pm

Thanks for the citation, even if it does have the wrong number of ls.

G'day VVB.
There are some really good blogs around to provide hours of happy reading.
"It's A Good Thing" ...
as Martha Stewart would say.

and they also provide psychotherapy too.
keep on rockin'

Now let's get this clear, Phil. Do you fall asleep on the couch before or after you read my blog? The answer means the difference between you walking or walking with crutches. Answer truthfully, no pressure.

No of course not.