The best letter to the editor I've seen in a long time, in today's SMH:

The Prime Minister's frantic attempts to fan flames out of his poll embers prompts an adage: where there's smoke there are mirrors. 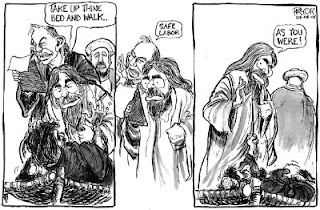 Also today's cartoon from Pryor in the Canberra Times is pretty good. Very good, in fact.

Apart from that, it's just wtf? By which I mean, P2B=nil.
As a former, now unfortunately deceased, colleague of mine used to say, "Talk amongst yourselves. Smoke if you wish."
Mind you, that was a while ago.

Labels: australia, ennui and you know, howardia, life and stuff