When I was in about my mid-teens, I toyed for a while with the idea of becoming a journalist. Prior to this I'd never given any thought to what I wanted to be when I grew up beyond my old man's admonition - well, more like a threat - that if I became a motor mechanic (as he then was), he'd kill me. Becoming a smoker was also on the proscribed list, and so I became neither.

But I was relatively accomplished at English as a school subject, so why not a journo? I can't recall whether, at that tender age, I'd become aware of the juxtaposition of the profession of journalism with lots of drinking: maybe.

Anyway I'm not a journalist but I do like to pick apart the failings of the journalist's art. Yesterday I found myself with some time to kill and a Courier Mail. Ripe fields, indeed.

In relation to Tourism Queensland's "best job in the world" project, we learnt that "(T)he Australians are so far behind in the voting stakes that their only hopes of landing the six-month, $150,000 'island caretaker' job is to make the short-list on their own merits." Several paragraphs on, we find "(T)he winner - to be announced on Hamilton Island on May 6 - will be the one who is determined by TQ to have the best range of technical and personal skills to promote the Great Barrier Reef and islands to an international audience."

"WTF?" I thought to myself, starting with the fact that I'd much rather my hard-earned tax went towards the best person for the job. However, it seems that there is some on-line voting and the winner will be determined by a combination of adjudged ability and on-line popularity, rather like Dancing with the Stars. Maybe they could have told us that, if it is indeed the case?

Anyway that's a pretty trivial offence - failing to explain the procedure. Just the facts, ma'am as Perry Mason used to say.
More obvious failings can be found everywhere else. My car rego renewal slip contains this classic: "Failure to pay your registration by the expiry date will make the vehicle, unregistered and illegal to drive." On that basis I'd be better off never paying my rego because each year I would be getting another car, albeit unregistered and illegal. But I could sell it for parts, surely.
It's actually quite rare to run across a superfluous comma, but there you go.
Anyway, I now have a far better job. Look at this: 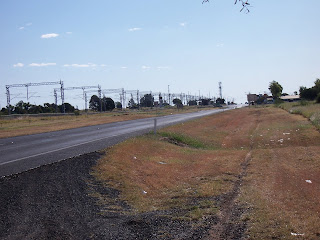 oh god I followed your link and it all made me sick.
If Tourism Qld knew their arse from a hole in the ground, they would not be allowing oil tankers to spill their muck allover the bloody pelicans.
The job mentions writing a blog about having spa treatments ... FFS!

re Your Territory:
is that the runway on Hamilton Is.?

re journalism: has nothing to do with any command of language, trust me.

Somewhere between Clermont and Emerald?

It's Blackwater. But a lot of those mining towns are very similar.