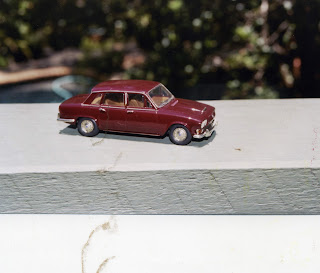 Aaah, the first of the many Triumphs. This the Triumph 2000 story.

I'd owned the Datsun 1600 sports for about a year and I still quite liked it. But one Saturday I was due to take out this sheila I'd been kind of courting and I decided it'd be nice to do so in a more comfortable machine. So I went out to do the rounds of the car yards: in Canberra, this meant going to Fyshwick.

So I was poking around and found a very nice 1968 Triumph 2000 Mk1. It was a dark olive green with beige upholstery, it had 20-odd thousand miles on the clock and was, in the manner of the big Triumphs when they were new-ish, quiet and refined. So I bought it. Can't remember if the lady in question was all that enthralled or indeed interested. For example, it's taken 35 years for Mrs VVB to come around to my way of thinking that cars are interesting.

The 2000 really was a ripper and I had lots of fun in it. It did let me down a couple of times, most notably the time that the old man and I went to Melbourne for a wedding. It was a cousin on my mother's side of the family, so she'd flown down early to do all that family thing. Dad and I left about 10 pm at night, for reasons I now can't recall. I was to show him what sophisticated touring was about - I had a set of driving lights and a portable tape player that I'd fitted into the glove box, linked to a small pair of speakers in woodgrain boxes on the back parcel shelf. Very sophisticated. 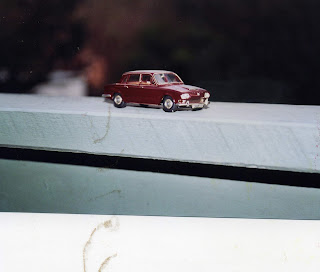 It was in early winter I think - it was certainly bloody cold - and around Holbrook the generator light came on. We pulled into a truck stop and Dad suggested I pull the genny out. Of course. As one does. At 1am in the morning. To do what with it, exactly? But I didn't ask, I just did what I was told. In fact, all these years later, I still don't question authority nearly as much as I should, and now I know why...

Anyway, it was so cold that I couldn't hold a spanner, so we stretched out in the seats and tried to sleep. The next morning the car started so we resumed the journey. Put simply, we weren't recharging the battery but as the engine, once running didn't use any battery power all we had to do was minimise use of other electrical functions. So no music. Also, using no indicators and minimising brake usage so the brake lights didn't come on. This was fine on the highway, once we got to Melbourne it got interesting.

Anyway, we got to about 10 kms short of the relloes before the battery said "no more, please!" After the wedding, and with a rewired generator, I came back solo and that was one trip: Broadmeadows to Canberra in 5 1/2 hours. Not bad for a car with 100 mph top speed.

Anyway, some time later I was consoling myself about the loss of yet another lady and mixed the driving with the alcohol, as one used to do. I attempted to demolish the block of flats across the road from the folks' place and did enough damage to ensure that the car would never be the same again. While it was in the repairers I first bought a Yamaha RD250 bike and then the Austin 1800 (we've already done the Land Crab story). 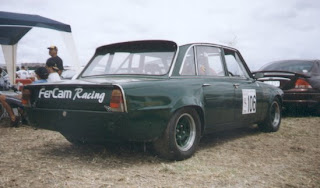 Here's a Mk1 Trump in the same colour as mine was - must say I like the set-up! Would I have another one? Like a shot. I reckon the Mk1s were the pick - the dashboard was quite futuristic in design, quite something considering the cars were designed in the late 1950s. Having independent rear suspension in those days was a real rarity, although the Triumph's swing axle design was far from perfect.

I can remember driving up to Sydney one weekend and for no good reason at all - I never did it again - I took the long road through Penrose and Bundanoon on the southern highlands. As I turned into the main street in Bundanoon (I think, or it could have been Penrose) another 2000 turned in at the other end. He flashed his lights but I still hadn't got used to the flasher on the left hand side of the steering column, so I had to make do with a raised finger off the wheel as he passed. Bugger.

For those who are interested, this model is another handbuilt white metal model from Crossway Models. You can see the rear door handle is drooping. Even with a strong Aussie dollar, these models cost a motza and so I do try to stick to the cheaper die cast models. Fortunately most of the cars I want are available in die cast.
Posted by phil at 6:34 pm

I've had lots of cars. One of the first was a Triumph Herald. I got hit side on and it broke in half. In the eighties I had a '75 Triumph 2500 auto (red) with a good body, etc, but lots of mechanical troubles. I blew the motor up just outside Cowra, and had the whole thing brought back to Melbourne on a semi. I put a good secondhand motor in but soon afterwards snapped a front axle. It was just worn out, poor thing, too many miles. A few years ago I was looking for a Dolomite Sprint. A woman across the road wanted to sell her ordinary Dolomite 2000, and I was thinking of buying it, but then it came home one night on a tow truck, completely smashed. Meanwhile I bought a smashed Mini from Fowles Altona and put the motor into a Moke. It was the most dangerous vehicle I've ever driven.
My first thing ever was a Lambretta scooter. I paid twenty quid for it and pushed it home to Prahran from the city. I wasn't sure it would go, then got an enormous thrill when a mate kicked it over and it started (I knew nothing about mechanics). And of course I burned the thing all around the place, no registration, no license, nothing. My biggest regret still is having to give my MGA 1600 to my lawyer. It was a lovely machine: grey body, red interior. And had the most beautiful soulful tone. Well I think it was probably too good for me, above my class, a car like that. And it was a while before I realised four fingers raised from the wheel were a greeting from other MGA drivers. And soon I was graciously signalling back to lowly 1500's. Yes, I was a toff alright. That's what possession does to you. It gives you Lifestyle.

Thanks RH. I've made a couple of references to the various Mk2 Triumphs I've owned but haven't done the full story yet. Same with the Dolomite - again, an interesting story I think, I owned that one in Singapore.

Lifestyles's fine ifyou can afford it, Triumph reliability made it a precarious passion on a budget.

Motor vehicles are the only autonomy poor people can get. Young blokes break out of the drab, the humdrum; cars like the Monaro were a Renaissance on wheels. The rebirth for me was a little motor scooter; liberator of my teenage years.