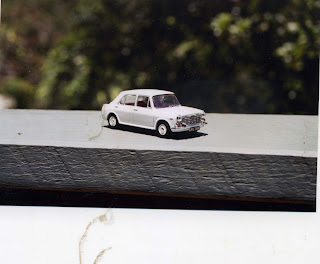 I've just scanned in some more pictures of some the remaining models that I haven't written about yet. This is the Morris 1100 story (although the keen eyed pedants amongst you will note by the grille that the model is in fact the Austin variant - this was at the height of British Leyland's badge-engineering phase so you could get the 1100 in Austin, Morris, MG, Riley, Wolseley and Vanden Plas versions).

Anyway, our 1100 was bought during the engagement period of the now Mrs VVB and me. I had my first mini, an 1100K, when we met, having sold the Triumph 2500Pi about two weeks before that fateful night. Hmm, might need to revisit that phrase...
Anyway, getting engaged and having to start planning for married life and all offered the perfect opportunity to change cars ("I'll back trade the mini and we'll have a cash in hand difference").
Yeah well. I sold the Mini and got an Austin Freeway (the third one I'd owned, refer to this post for the history). Then one Saturday afternoon, not too long after, I went with one of my housemates to look at a Holden EJ wagon - this feller had decided to supplement his income by doing a bread run and he needed a van. We found the house, there were cars everywhere. My mate knocked at the front door and blow me down, it's answered by a bloke I used to know several years earlier. An intriguing and very entertaining fellow, known as "Honest Ed", he dealt in anything that would make a buck. So we go out the back and the yard is full of cars, including the desired EJ wagon - my housemate bought it - and a Morris 1100.
For no good reason at all except I liked to change my cars every three months, I take the 1100 for a drive, it seems fine, I buy it. Another housemate who was a proper mechanic (ie trained and employed as such) diagnosed a burnt valve, but in the year or so (the soon-to-be Mrs VVB started to question the frequency of car changeovers...) that I owned the 1100, that never caused a problem.
It did let me down badly once, when we took it to Melbourne, with a married couple who were friends of ours and their baby. The trip down was marred by the motor frequent cutting out, I couldn't find the problem. Then the car ran fine while we were in Melbourne but on the trip back, just out of Jugiong, it gave up the ghost entirely.
I hitched into Jugiong, rang home, it was a Saturday arvo so the folks were at bowls so it was a bit of a wait but I eventually got onto the old man who came and collected some very frazzled folks and baby. Diagnosis - torn fuel pump diaphragm.
The 1100 is still distinguished by being the only car we ever gave a name to - Emily. It was a faded light green. When Mrs VVB and I eventually went overseas we couldn't sell it. The old man took it off our hands and eventually sold it to the daughter of a neighbour. She later had quite a bad accident in it, she was OK but the car was kaput.
As all my devoted readers know, each car story finishes with the question, "would I own another one?" In this case, if I had a spare garage spot, the answer is a definite maybe. They were as slow as a wet weekend but with the Hydrolastic (pneumatic) suspension they had a quite a good ride, if slightly unusual handling. The seats were comfy and they were very economical - I used to get by on about $2 a week for petrol in 1976. Some friends had the more powerful 1100 'S' version and just last week on eBay there was a Vanden Plas version, which would be very rare, walnut dash and all. Ah time, time, time, see what's become of me...
Posted by phil at 10:13 pm

The nephew just got his VW bug wiped out by a tank driver going through a red light. He stood his ground with the insurance company and got almost what it was worth but still waiting for the cheque. Fortunately he had a spare just waiting to be spruced up. $250 and by the time he's finished it will be worth about $6000. The one that was hit was driven by a little old lady who bought it in 1965, the original papers were still in the glove box. Very funny to see 6'4" man fold up in that car, funnier watching me get in beside him.

... and I would like to see film of that Jahteh!

Dear LL -
Cars have to have names.
My friends Holden is Gladys after wife of Sir Laurence Hartnett.
My last car was Marge because it was blue.
EMILY?
See Emily Play: The Masters ?

Here's the drum on whether you name your car or not.