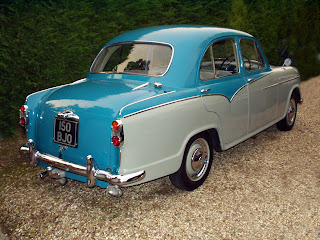 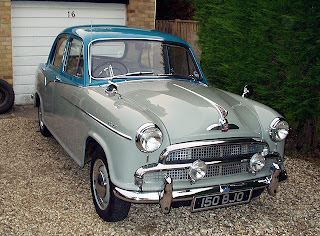 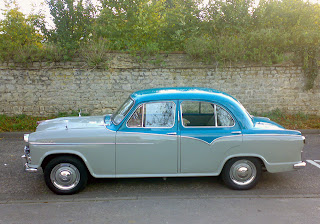 What a turnaround from last night's enuui and introspection. Just look at these pictures.
What car is this, I hear you ask yourselves (well actually what I may be hearing is that clicking sound as people move rapidly in the direction of away, but let the rest of us plough on nonetheless).
It is in fact the actual car on which the model in this post and this one also was based. A couple of days ago one Stuart Dent, of somewhere in the UK, left a message on a recent post inquiring about my model. Seems he had been searching for a model Isis, had run across my original post and was dumbfounded, gobsmacked one might even venture, to realise that it was a model of his very own Morris Isis, rego no 150 BJO. Looking at my original post reminds me that I'd never taken fresh pictures of the model which are actually in focus. So here are some. 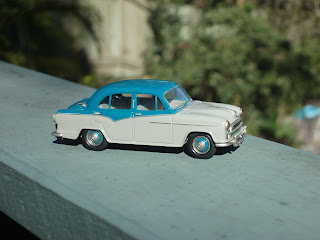 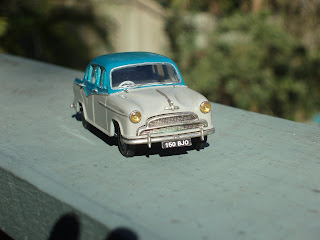 Seeing the pictures of Stuart's car resolves one of the disappointments I had with the model. The bonnet just seemed too short, as I recall my own car had a monstrously long bonnet to accommodate the 2639cc C series motor which distinguished the Isis from its lowly 4 cylinder cousin, the Oxford. You can see this difference in this photo, of Stuart's car alongside a Mk1 variant. 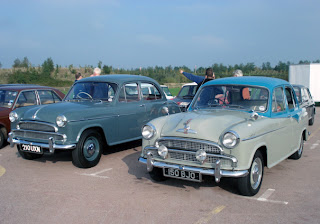 But of course the Mk2 versions had vestigal fins, making the back appear longer in proportion to the bonnet. I do notice some sort of green fungus growing on the radiator grille, though, which I will need to figure out how to fix.
Anyway, what a pristine example Stuart's car is! Stuart says it's unrestored which makes it just amazing - as a Mk2 Isis this would have been built around 1959. Because my own one was never in such good nick. I got it off the old man in October 1968 and sold it about a year later. There it is in the picture below. Do notice the racing stripes lovingly applied with electrical tape. As I was still in school I didn't have much income - I used to earn $13 a weekend at the garden centre which covered petrol and beer, but not proper racing stripes. Or paint. Or anything else. I have no idea what I must have been thinking when the photo was taken, but the pose is very disturbing. Not to mention the floppy toweling hat, the faux-Lennon glasses and something hanging around my neck. On top of the after effects of having my brain eaten yesterday, I think it's time to crawl back into bed and slip into unconsciousness until Monday. These memories are too much to bear.
So, good people, the wonders of globalisation and the intertubes. I never even thought I'd get a model of an Isis, but at that time I only knew about mass-produced die cast models. I should have realised that somewhere in a corner of old Blighty, someone would be lovingly creating by hand models of forgotten English motoring history. So to get my model was great. For Stuart to be moseying around the nettysphere looking for Isis-related paraphernalia and run across this little blog might be expected, given the tubosphere's ubiquity in these modern times. But to find a model of his very own car? Amazing. I must let Carl and Amanda at Crossways Models know.
Afterword: in the time it took to put this post together, what with taking and uploading photos, scanning, doing other stuff, etc, there was a car accident just outside. I heard the tyre squeal, the crump and thensome other sounds. I raced outside and there was a car on its roof - seems like it had been travelling up the hill, maybe a bit fast and a car had come out of the street on the left, the first car had stopped and swerved but the second car must have just caught it and nudged it over on to the roof, an easy thing to happen when a car it not balanced on the road. There were already plenty of people on the scene so no need to intervene. It was a bit different a few years ago when a young bloke with a skinful aboard wrapped his car around the light pole alongside our driveway. I got there first but couldn't help him....
Posted by phil at 11:59 am

Wow...lovely car. When I was a kid my grandfather and father had a Morris Oxford...it was grey on the bottom and a crimsony colour on the top. It smelt beautiful inside. thanks for the memories.

Nice duco job, but it looks a heavy car.

Yes, they were quite heavily built, the motor was a monster although it only put out about 55 hp.