it's alright ma, i'm only bleeding

Statements of the bleeding obvious.

You look around the lead sentences in many small blogs and you get "can't be bothered blogging" or some variation. We've had it here at Chateau VVB on many occasions and it has now been formalised by the P2B (propensity to blog) quotient, just to save time typing.

Yet at the same time you (or I, anyway) get the feeling of guilt that, having established the blog, it should be maintained, fed, nurtured and allowed to grow.

It's the growing bit that gets worrying he said, starting to warm to the stream of consciousness about to...what?

You see, the growth should be in the writing - content, style, ability to entertain and/or inform. And so if the growth is not in evidence, you start to wonder....all over again.

You'd never believe, reading this little blog, that when I was 16 I wanted to become a journalist. That was even before I started drinking, surely the other main prerequisite for a successful career in journalism along with some ability with words.

Ranting about John Howard doesn't do it and - er, big admission coming up - it doesn't even make me feel good any more.

Although those lucky people who got to listen to my unsolicited comments on the 7pm ABC radio news as we drove home tonight might query that assertion.

So, how to grow? Maybe taking some more effort over the writing might help: you know, drafting it up offline and posting later. Although that might detract from the immediacy of some comments if they relate to current events. It's not a journal or magazine article, after all.

And never forget: it's not a competition. Which is just as well, as VVB doesn't seem to figure anywhere on the Oz Blogs rankings. Although looking through this list certainly confirms the nature of the blogosphere as a multitude of small communities. What is the fascination with cooking, he asks himself?

If you go back to post number one, you will see that I never set out for VVB to be a well researched exposition on anything, rather simply some personal views: opinions, in fact. I'm not a specialist in any particular field either by training or experience. No, actually I am: I'm a darn fine cog in any set of big wheels, the sort of organisation that looks like a Heath Robinson invention. Like the one below. In fact this particular one is very close to the actualite. (Picture courtesy of here). 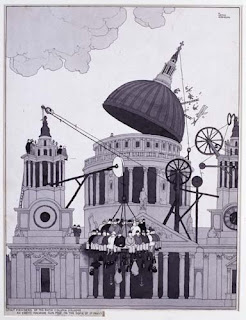 The challenge is to turn this cogginess, coggitude if you will, into something else and that's the little journey we have been going on for the last couple of months. I thought I was making good progress until this morning,when a well credentialled amateur - well no, this person has practised professionally - burrowed into my brain and set the hares running. Talk about discomfort!

So how well do we know ourselves? Some people seem to from an early age. Maybe in many of these cases the external confidence and certitude masks the inner turmoil. Other seem to drift lazily through life and it all falls into place: not necessarily fame, wealth and power, but just whatever it is that floats their boats.

Anyway my brain has been burrowed into and now I have to assess the feedback. Am I holding onto the past? Did I simply answer the questions honestly and this person has misconstrued the responses? Does it matter a flying fig?

This is the problem with just writing stuff as it comes into your head. You get to a stage in the piece, you've said bugger all, you have in fact stolen a little bit of everybody's lives (well no, it was your choice to plough on so ya boo sucks if you have) and oliver sudden you have to make a point, the 'aha' moment, and draw it to a satisfying conclusion.

No such luck, at this or any other time. The answer is 'I don't know', or my other current favourite saying, 'the answer is always in the middle'.

Fuck it, you finish the shitty piece, press 'publish' and go trawling and almost immediately come up with some good stuff. Like this:

"Yeah, we make big efforts over the batter," says Rigby. "I can't stand it when you get batter which is really thick and there's a shrivelled piece of fish inside." What prompted him to get into a seemingly declining fast-food trade? "I set up Sea Cow with my brother Dan after working as an equity trader in the City," he says. Surely there was more money in his old job? "Maybe, but it was soul-destroying, watching people getting fired all the time. So I jacked it in and took some time off to travel." He found himself in Sydney, Australia. "They have great fish bars with the catch of the day spread out on ice. Simple, brilliant food with an accent on freshness. I knew this would work over here. A new spin on an old favourite - that was the idea."

I mean, does that or does that not get the mental cogs turning? Maybe not so much the reinvention of fish and chips (except "the eating of fish and chips also enables it to be appropriated in support of cosy visions of democratic solidarity" perhaps), but the - to me, anyway - more obvious one of yet another story of the arid world of big money: "soul-destroying". Ever since Bernard Salt coined the phrase I've had a theory, utterly unsubstantiated by anything except blind envy and deep prejudice, that most of the 'sea change' stories are of people who are precisely in that position: they've made a motza, have got sick of the corporate life, and have the comfort of enough moolah to follow their hearts. Cool, if you've got it. The alternative, namely living in a caravan park - well, one of the few still left - doesn't do it for me.

And the reinvention of fish and chips as a piece of Australian innovation. Who'd have guessed? Actually, this is a rattling good read, the sort you get much more frequently in Pommy papers than here (he says, returning to an old theme).

Not only, but also: justification for why I feel unsatisfied with my bloggitude...I'm an amateur. Glad we cleared that up.