P2B - pretty bloody minimal. However, have some of today's letters to the editor in today's SMH.

I begin this letter while sitting on a train stuck between Waverton and North
Sydney stations because the train ahead of us has had a power failure. At least
I have time to reflect on the various ways that there has been progressive
degradation of the system.

In the 1960s my father, a stock and station agent in Grenfell, could phone an order to Sydney before 2pm and the goods would arrive on the next morning's train. Then, the Askin government decided to reduce the service to three days a week. I seem to remember various discussions around "cheaper to transport by road" and "bloody unions". That was the beginning of the rot.

The trend continued. Successive governments have closed rail lines, counting only the short-term costs. You have to wonder about such costs as building and repairing roads to withstand the mass of heavy traffic, the cost to society from injury and death caused through truck accidents, the hidden costs such as sleep loss from B-doubles thundering through suburbs during the night, and the environmental costs from diesel burning.

So now we have excess heavy road transport, an inadequate intrastate rail service and a pathetic urban network. It seems much of this rot came from governments adhering unthinkingly to various ideological fashions, especially so-called economic rationalism and the "user pays" cant. Well, how rational is it to fail to invest in maintaining infrastructure that makes a society work?

And the news, by the way, is the user always pays, one way or another: through monetary charge or through some loss of amenity. This applies whether facilities are run by government or private enterprise.

It's time we demanded that governments stop pandering to simplistic or selfish reason and start addressing the question of facilitating a healthy, functional society. The investment and commitment needed to maintain a proper preventive maintenance program for our rail system would be a good start. We used to have one, but someone got rid of it.
Peter Thompson Killara

I am furious. Not just at Howard's continued incarceration of Haneef, but more at Rudd showing not-so-early symptoms of Beazley's "Tampa ticker".
Peter Dwyer Epping

When is federal Labor going to display some principled opposition to ill-conceived Government action (for example, the new Northern Territory laws and the Haneef visa revocation) rather than supporting everything the Government proposes "in principle"?
Beatrice Marett-Bird Ashfield 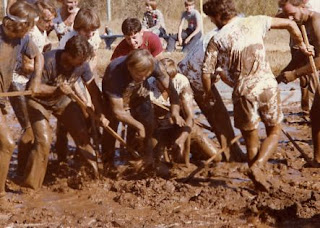 Solomon Burke, Nashville. Offspring no2 thinks I've gone over the to the dark side, all I can say is "c'mon you ole devil, take me down." It's great.

Tonight's picture shows you the cream of the Islamabad diplomatic community sorting out a minor protocol kerfuffle in the time-honoured way. Kind of reminds you of this, doesn't it?

I hope you see this as it's been a bugger trying to contact you...

The Morris Isis model you mention in one of your blogs is actually a model of my car - reg number 150 BJO! It's very accurate, except that the wheels are in fact grey not turquoise.

I can't find one anywhere except for yours! Could you contact me please? stuartdent@tiscali.co.uk