It'd be really handy to know what influences the propensity to blog (which from now on, until we forget it, will be referred to as P2B). Last week the posts came quite easily, even if they weren't all that inspiring or different (Howard, cars). On the other hand, I doubt if anyone comes to chateau VVB for either inspiration or difference...
Anyway I've just not been in much of a mood to write anything over the last few days but feel this...bloody obligation.....to churn summat out. Know wot I mean?

So from my favourites list, here's a couple that I only visit occasionally, mainly because they tend to suck me in and I spend a few hours reading and following links.

I dunno who Anil Dash is apart from what he says about himself, he lives in New York and is associated with a company that provides, as a competitor to Blogger/Google, infrastructure for blogs and other similar stuff. He's got a lovely straightforward writing style, I'd love to hear him speak as I imagine he's a very clear communicator. He has a rare ability to take a subject that you may not have much interest in, and make it compelling.

Look at all the blogs and sites he contributes to. How do people make that time available? Maybe they work 24/7 (it is New York, after all). Maybe he types faster than me (in fact I'm sure he does). He probably also thinks faster, more to the point.

And this one will suck you right in if you are interested in organisations and management (sounds of footsteps heading for the virtual door). There is much to the power of narrative if it's done well: "bloody good stories well told" is the phrase I believe.

I think most organisations put a lot of effort into how they do their strategising, but nonetheless I think many of them go about it quite arse-about. A year or so ago I was involved in a little experiment (well it was experimental from my perspective, others had more confidence!) to put together a community of practice.

This ended up being very successful, just how successful I'll get an insight into in a few months' time. The guiding principle for the group was that "culture beats strategy." The number of references there indicates that the phrase isn't unique or new, but even so I'd guess that you'll find organisations will use a so-called 'strategic' approach 99 times out of 100.
The basis for the culture is the personal relationship. In the example where I was involved, we only had 20 off people so it was a doable task. Part of developing a common culture with this group involved getting them to tell their stories as well as some surprising simple exercises to get them out of their own comfort zones and thinking more deeply about each other's comfort zones, in other words understanding the issues and objectives that drove each other.

With business and university people in the same room, you can imagine that there was not a lot in common on most issues. I was hoping that we could remove from the equation the organisational impediments, particularly for the uni representatives, and just focus on what could be achieved within these people's own areas of responsibility. And believe it or not, quite a lot could be, once we got thinking about it.

That's not to say that solutions fell from the sky, but having made the breakthroughs on the personal level, there was more willingness to seek agreement rather than throw the hands in the air. On the Anecdotes site linked to earlier, I found this in the left hand sidebar. Communities of Practice, as popularised by Etienne Wenger, is another way of describing the outcomes of taking the culture beats strategy approach to group or organisational development.

Well that filled in half an hour or so that could have more usefully been devoted to the work I brought home. The fire's going, I put on a big piece of wood that had been white-anted just to get rid of it, and it's smoked the place out. Which means we have to open the windows, which lets the cold in. Very sensible. 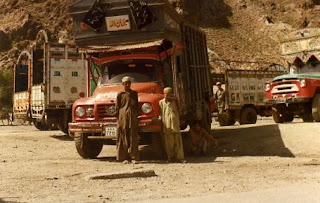 Tonight's picture comes to you from a place where they do strategy differently. This is Torkham, on the Pakistan/Afghanistan border at the commencement of the Khyber Pass.

Negotiations with the Customs people could be exhaustive, a personal relationship would have helped, often an inducement could result in a very beneficial relationship.
Posted by phil at 9:52 pm