leaving on a jet plane

"His lawyers indicated to my department ... that he wanted to get out of Australia as soon as possible. If anything that rather heightens, rather than lessens, my suspicions."

Really, 'Minister'? How about that he's just been through an unconstitutional application of executive power? Dressed in Guantanamo orange (what signal do you think that sent him? I bet it's deliberate). He's got a new baby he hasn't seen? His lease has been torn up and he has no home here?

Don't you reckon he might quite justifiably be trying to put as much Indian Ocean between himself, his family and the wide brown land as he can?

If you genuinely believe what you said, you're a disgrace. Not that we didn't know that already. And while you're at it, what part of the Christian creed you're so devoted to supports that particular view of the world, where everybody is guilty until proven innocent, but still guilty? Nice one.

It's Andrews overboard, watch Howard let him go. That'll be a shame, it's hard to find parliamentarians as extremely socially conservative as the PM and Hyacinth, and Andrews filled the bill perfectly. Howard will be very upset. The people will be picking up on this, make no mistake. "First they came for..."

Good thing. Stew in it, you destroyer.

**I'm stumped for a musical reference title. I could use "Yours is no disgrace" again and strikethrough on "no", but that's piss poor. There are some very applicable song names with "scum" in the title but while that's how I feel, it just diminishes me too. 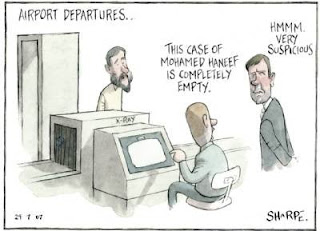 Update: gave it a title. And found this cartoon at the Canberra Times.

Second update: Channel 7 news tonight was heavy on the fact that Haneef was flown home first class (mentioned 3 or 4 times) at taxpayers' expense.

Just another cheap crack consistent with the government's agenda? Or laying it on with a trowel that at last Haneef got some recompense? I immediately jumped to the first conclusion, then the second occurred to me. Who's to know? But they really empathised the first class bit.
Posted by phil at 12:38 pm

Yes - Kevin Andrews - me thinks the lady doth protest too much!!!The more he asserts his "suspicions" about Dr Haneef, the bigger an arse he looks. But now the man has left the country, wait for the latest media spin, whitewashing the government's ineptitude once again!

All Liberal voters in the pointy bit of the flying kangaroo.

In Economy he would have been more likely to mix with people the Government might describe as 'subversive'.

The good thing is:
the 'Third World' now has one doctor more than it had before.